Behind the Scenes in Conservation: Stephen Parrish 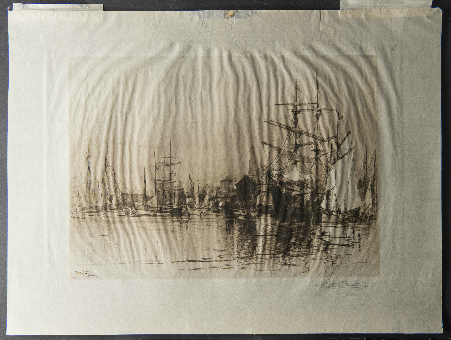 Much preparation has gone into the new exhibit in the Schiff Gallery.  The Etching Revival:  From Daubigny to Twachtman will be open to the public February 13, and many of the prints made their way through the Paper Lab for conservation before being matted and framed.  The print Inner Harbor, Gloucester is one of twenty created for the 1883 publication Original Etchings by American Artists, originally advertised as “a combination of ORIGINAL ETCHINGS OF GREATER MERIT AND ARTISTIC EXCELLENCE than has ever before been offered in book form….”  The etching by Stephen Parrish had dramatic cockles radiating from a water stain in the top center.  It was printed on a very smooth Japanese paper that is very reactive to water.  The paper was probably stretched when it moved through the printing press, and the deformations were exacerbated after it was removed from the book.  The damage most likely occurred when someone used too much water as they tried to separate the print from its original mount in the publication.  Luckily, the print responded well to washing and flattening.  See the results when you visit the exhibit.