Behind the Scenes in Conservation: Conservator Choices 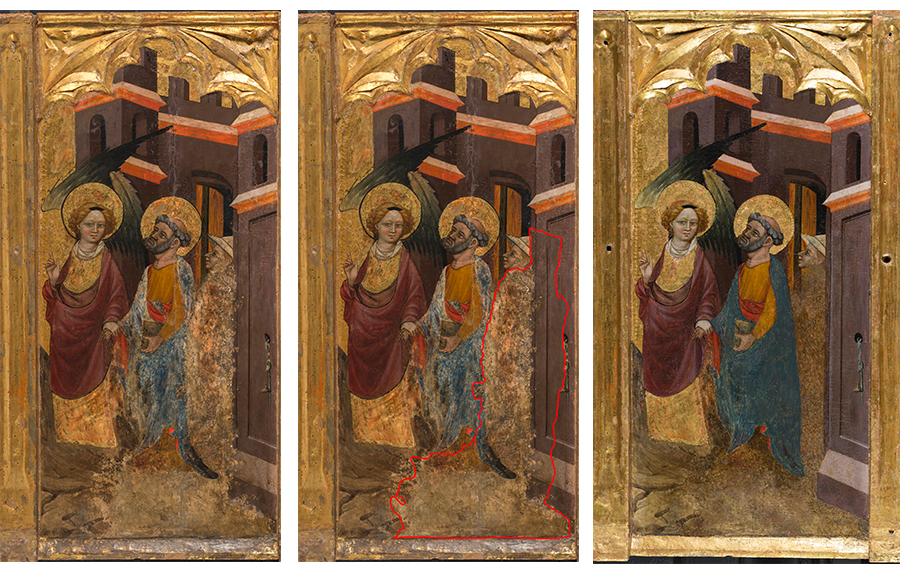 While the paintings conservation studio is under renovation, we thought you might like a look at an example of the choices that conservators can face.

Sometimes a painting that is undergoing conservation has suffered a significant loss to its composition.  This scene from the large altarpiece known as the “Retablo of Saint Peter” is such an example.  The very big loss in “Saint Peter Released from Prison” occurred before the altarpiece was acquired by the museum in 1960, and for more than fifty years, it had been displayed as you see here, before treatment.  The scene is one of nine in the altarpiece, so the damage was not very prominent when the panel was in place in the ornate, gilded altarpiece.

Since there was no trace of the original composition in the loss, any reconstruction of the missing figure of the prison guard would be a complete invention by our paintings conservator.  And that is something that is conservation professionals avoid.

On the other hand, the guard and the prison are an important elements of this episode in Saint Peter’s life. One night, as he languishes in prison, an angel appears in the night, miraculously unlocks the door and leads Saint Peter out of captivity.

The choice then was to decide if any of the lost elements should be recreated.  Here you can see, after treatment, how our paintings conservator chose to handle the large loss.  The remains of the guard’s head were carefully preserved, but none of his body was recreated.  Some minor recreations were undertaken though: the right border of Saint Peter’s blue mantle was invented, and the straight edges of the architecture were completed.  The blank area was darkened overall and blended to make it recede visually.

The new retouching allows the scene to be more legible.  The viewer can more easily see the parts that are present.  The adjusted retouching adds depth to the building and showa that the angel and Saint Peter are moving out of the prison and away from the guard.  But in keeping with professional conservation practice, all the restoration can be easily removed if a future conservator makes a different choice about how to handle the large loss.

This painting was also the subject of an earlier blog post.