Behind the Scenes in Conservation: A Troublesome Letter 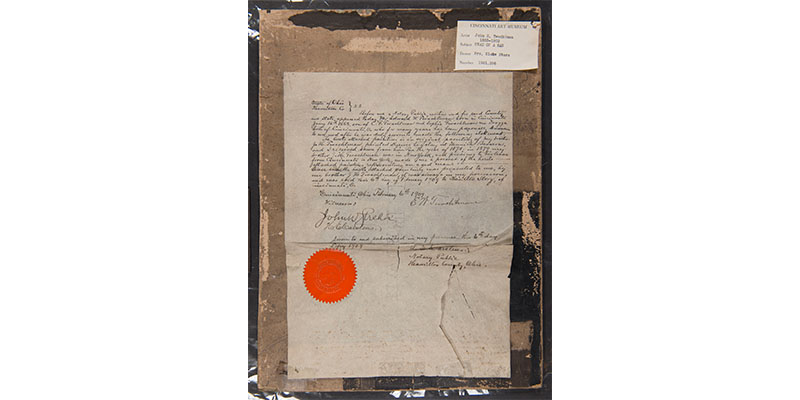 Oil paintings do not usually come to the Paper Lab, but occasionally the conservators share projects, and that is the case here.  The paper conservator is working to save a letter on the back of a small painting on board by John Twachtman.  According to the letter, Twachtman painted this portrait while in Munich in the 1870s.  The letter is dated 1909 and was attached to the back of the painting at that time.  The top half of the letter was glued to the board, and the bottom half was left free, but was later taped along the bottom with pressure sensitive tape.

If the letter had been adhered in the early 1900s, the adhesive would be water-soluble glue or paste.  That would make removal fairly easy by using carefully controlled moisture to soften it so the letter could be lifted off.  Unfortunately, water did not have any effect on the adhesive, nor did any other solvent or combination of solvents ordinarily used to soften natural and synthetic adhesives.  The letter could be peeled off dry, but that would take off the top layer of the back of the painting support.  The transparent tape carrier was removed by warming it and lifting it off with a scalpel.  Some of the sticky adhesive in the bottom right has been removed.

The notarized letter was written on thin paper that has very little strength.  It has a lot of tears in the bottom half that will be mended.  Because the letter will remain on the back of the painting, it will be protected from future damage when it is returned to its frame.  Look for the front of Twachtman’s painting in a future blog post.